Motion Towards J&Okay Cop Amid Anger Over Assault Of Journalists 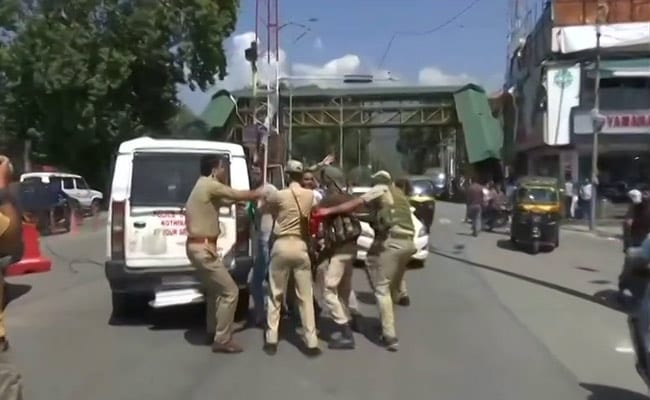 The motion towards the journalists was extensively criticised.

After a number of journalists have been thrashed in Srinagar on Tuesday whereas protecting Muharram processions, the Jammu and Kashmir Police immediately took motion towards a cop who led his workforce members whereas performing towards the group at Jehangir Chowk. J&Okay’s prime cop had additionally criticised the actions, saying, “This isn’t acceptable”.

In photographs and movies shared on social media, the cop was seen chasing away the journalists at Srinagar’s Jehangir Chowk and thrashing them with a baton. A senior police officer stated the Station Home Officer has been faraway from Shergari police station and shifted to district police traces.

The incident has sparked large criticism. “He is an impartial photo-journalist. His digicam is his livelihood. The administration owes it to Sajad to compensate him for the loss he has suffered whereas working,” former Jammu and Kashmir Chief Minister Omar Abdullah tweeted whereas sharing photographs of the incident.

“Media is spending hours debating the human tragedy and unfolding disaster in Afghanistan however will they converse up for their very own group in Kashmir who have been overwhelmed to pulp immediately by safety forces for doing their job?” tweeted PDP chief and former Jammu and Kashmir Chief Minister Mehbooba Mufti together with the video that captures the chaos at Jehangir Chowk.

See also  "Man, I Can Really feel For Our Cricket Crew": Paytm Chief On Buying and selling Debut Day

Journalists in Kashmir have been working in tough conditions and there are frequent complaints about comparable assaults. Nonetheless, motion from authorities has been uncommon.

Sajad Hameed, a younger freelance photojournalist stated that his digicam was damaged whereas he was being thrashed on Tuesday. “My father gifted me this digicam. It was my birthday reward final 12 months. I can not afford a second digicam. Authorities ought to compensate,” he stated.

In a press release, the Kashmir Press Membership have urged the authorities to “respect freedom of expression” and “permit journalists to carry out their skilled duties”.

In April, Inspector Normal of police Kashmir Zone issued instructions to all district SSPs to take authorized motion if a journalist comes close to an encounter website or “legislation and order conditions”.

The controversial order was issued after a video was extensively shared on social media by which journalists have been seen being thrashed.